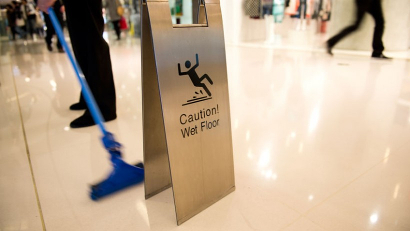 On the 31st August 2017, the Plaintiff slipped and fell whilst shopping at Dunnes Stores suffering injuries to her hips. She was awarded the sum of €102,000 in damages by the High Court after she slipped and fell on a spillage on a floor in the shop. She fractured her right hip and subsequently required surgery involving a hip replacement. Ms. Justice Miriam O’ Riordan was satisfied that the Defendant had not established a sufficient system of care at the time of the fall.

The Defendant subsequently appealed the finding of negligence to the Court of Appeal. In dismissing the appeal, the Court of Appeal noted that the Plaintiff while crossing an aisle towards the grocery section suddenly slipped and fell on the Defendant’s floor. She was subsequently assisted by fellow shoppers, one of whom removed her shoe and wiped some substance from the heel. There was CCTV evidence of the incident wherein an employee was seen to be sweeping the aisle floor a number of times before the Plaintiff’s fall at 1.03p.m. The employee alleged that she was keeping a look out and saw no spillage. The Court of Appeal said that there was nothing to preclude the Trial Judge’s finding that, on balance, the spillage was likely to have occurred between 12.40p.m. and 12.58p.m. because of the volume of customers passing through the aisle at that time and the fact that another employee was cleaning shelves in the aisle at the time. The Trial Judge had seen the CCTV evidence of the employee brushing the floor looking straight ahead for the majority of her hour shift and the employee accepted that her mind could wander during that boring job. The Trial Judge also noted that the employee’s training had not concentrated on how vigilant her passage through the aisle should be.

It was not shown by the Defendant to the satisfaction of the Trial Judge that the more probable scenario was that the substance came on to the floor of the aisle post 12.58p.m. and on that basis the Trial Judge was correct to find that the Plaintiff must succeed in her action.